Congrats to our grads! 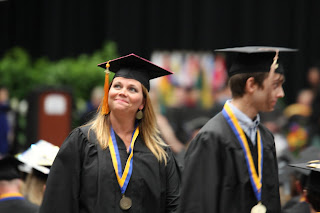 Good morning my fellow Rotarians. We are in the midst of graduation season and there are a few fun stories I thought worth sharing.

Be unique
Robert Orben recently told graduates… “A graduation ceremony is an event where the commencement speaker tells thousands of students dressed in identical caps and gowns that 'individuality' is the key to their success.”

Another chance
It's graduation day, and everybody's going to get their diploma but Josh. At the assembly, the entire senior class stands up and shouts "Let Josh graduate, let Josh graduate!" The principal agrees to give Josh one last chance. "If I have five apples in my right hand and five in my left hand, Josh, how many apples do I have?" he asked. Josh thought long and hard and then said: "Ten." And the entire senior class stood up and shouted, "Give Josh another chance. Give Josh another chance!"

Ask for money
Commencement speaker Gary Bolding told grads… “Your families are extremely proud of you. You can't imagine the sense of relief they are experiencing. This would be a most opportune time to ask for money.”

Make this look natural
It was graduation day and Mom was trying to take a picture of their son in a cap and gown, posed with his father. "Let's try to make this look natural” she said. "Junior, put your arm around your dad's shoulder." The father answered, "If you want it to look natural, why not have him put his hand in my pocket?"

Average is okay
George W. Bush told the graduating class at SMU last week… “To those of you who received honors, awards and distinctions, I say well done. And to the C students, I say you too may one day be president of the United States.”

I'll show you how
A young man hired by a supermarket reported for his first day of work. The manager greeted him with a warm handshake and a smile, gave him a broom and said, "Your first job will be to sweep out the store." "But I'm a college graduate," the young man replied indignantly. "Oh, I'm sorry. I didn't know that," said the manager. "Here, give me the broom – I'll show you how." 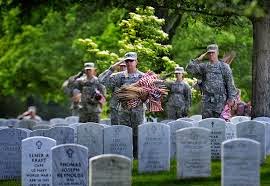 Good morning my fellow Rotarians.  On the beginning of this Memorial Day weekend I thought it only fitting to share with you some history.

Originally known as Decoration Day, it was a day set aside to honor the nation's Civil War dead by decorating their graves.  The first observance was May 30, 1868.  It was a short speech by General James Garfield at Arlington National Cemetery and then over 5,000 volunteers decorated the graves of the more than 20,000 Union and Confederate soldiers buried in the cemetery.

This 1868 celebration inspired many local observances and after World War I, observances also began to honor those who had died in all of America's wars.

In 1971, Congress declared Memorial Day a national holiday to be celebrated the last Monday in May.  Today, Memorial Day is still celebrated at Arlington National Cemetery very much like the first one, with a simple speech by either the president or the vice-president and then a wreath is laid at the Tomb of the Unknown Soldier.

Flags are also placed on the graves of each of the 260,000 soldiers buried in Arlington.  Over 1500 soldiers of the 3rd Infantry Regiment (or better known as the Old Guard) perform a “flag in” ceremony which take them about four hours to place a flag at every grave.  They then remove those flags on Tuesday morning before the cemetery is opened back up to the public.

Now let me tell you a story about a real veteran from Oklahoma who dropped out of high school to fight in World War II.  It took him 72 years to receive his diploma, which was accomplished this past week.

Bill Larkin, 90, who left school during his senior year in 1943, served with the US Marines in Iwo Jima and elsewhere, joined the 2015 graduating class ceremonies at Skiatook High School this past Thursday evening.

Skiatook invited the veteran to receive his honorary diploma as a way to recognize his service and inspire graduating seniors.  When school officials discovered he only lacked on history credit to graduate, they decided his military service fulfilled that requirement.

"I do not know what I need a diploma now for, I am not looking for a job.  I have done just fine with out one," Larkin told the Claremont Daily Progress newspaper.  Larkin spent three years overseas during the war and returned home to marry his high school sweetheart, Lois.  After the war, he worked as a truck driver and pipeline construction supervisor, but never went back to finish the class he needed to earn a diploma.

Memorial Day is a rich tradition where all Americans can take pause to pray and to thank our greatest heroes.  Let’s remember to honor those men and women who have paid the ultimate sacrifice for our freedom.  And that is the Bottom of our News on this May 22, 2015! 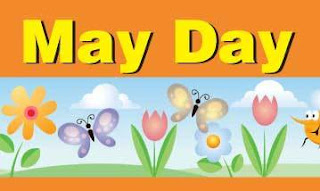 Good morning my fellow Rotarians. Happy May Day! For some of you this may be a little known holiday, but not long ago it was widely celebrated in our country.

May Day originated with the Greeks and Romans… based on ancient fertility rituals and agricultural traditions. They honored Flora -- the goddess of springtime. Medieval England created their own version by adding the Maypole decorated with flowers and streamers in the town square, and people danced around the pole with joyful frolic to mark spring's arrival. Today you will still find Maypoles in many European villages and towns.

The themes of "fertility" and "frisky antics" didn’t fly with the Puritans in the US because they thought the holiday was too pagan, so that version of May Day didn’t catch on.

In 1886 May Day become known as a day for protest when workers in Chicago protested and rioted in what became known as the Haymarket Affair. International Workers Day was also born that decade and became a worldwide special day to honor workers. It was the precursor to our US Labor Day. Since then, May Day has become popular day for protests.

The May Day I remember as a young boy was one that was a lot of fun. My mom used to help us prepare May baskets with candy and flowers (actually I think they were re-cycled Easter baskets, but we didn’t care!) Early on the morning of May 1st we would sneak up to the houses of family and friends and leave a basket on their front step with the hope of not being seen or getting caught. It was a great adventure and we loved it, especially when people seemed to not have a clue who might have left them those special gifts.

Years later an aunt told me that she always knew, but didn’t want to spoil it. This was the same lady who broke the news that the Easter Bunny was my dad. That is the May Day of the past, an old tradition that has since faded away in America.

But for us today, we can celebrate coming of spring by proclaiming happy May Day! And that my friends is our Bottom of the News on this Friday, May 1st, 2015.
###
Posted by Unknown at 4:22 PM No comments: