This Day in History
Good morning my fellow Rotarians.  This morning we will look back in history to report on some notable events that happened on this day October 28th…
1775…  British proclaimed that no residents could leave Boston and held the city hostage for nearly six months.  A group of Bostonians formed the original Tea Party who eventually drove the Brits from their city with the help of Virginian George Washington and his Continental Army.
1886… Grover Cleveland dedicates Statue of Liberty.  Lady Liberty was a gift from the French citizens because of the US’s commitment to liberty and democracy during the American Revolutionary War.  The 151-foot tall copper statue was built in France and shipped to New York in 350 separate parts.  It took 6 months to reassemble before being dedicated on this day 1886 by President Cleveland.
1962…  The Cuban Missile Crisis comes to an end after a two-week intense stare down between Russia and the United States.  Russia had place missiles in Cuba (in support of Castro’s new ‘revolution’).  President Kennedy stood firm that the US would not tolerate missiles that close and once he ordered a naval blockade around Cuba Russia’s Nikita Khruschev withdrew the missiles and the crisis subsided.
1965… Workers complete the famous Gateway Arch in St. Louis, MO.   Construction of the nation's tallest memorial (at 603 feet high) took four years of round the clock work.  The arch symbolizes the gateway from east to west in the United States and commemorates the US western expansion.  The arch has become one of the most famous landmarks around the world.  (And YES, the Cardinals won last night in an amazing comeback!)

1992…  The Leif Erickson Tunnel was completed in Duluth, MN.  This half mile tunnel is unique in that is runs under a part of downtown Duluth along Lake Superior.  The tunnel was the final leg to complete the building of Interstate-35.  The I-35 project took nearly 30 years to complete and runs nearly 1600 miles from the borders of Mexico to Canada.
And that is ‘this day in history’ as the bottom of our news on this Friday, October 28, 2011.
###
Posted by Unknown at 1:00 AM No comments:

Gotta Love That
Rally Squirrel!
Good morning my fellow Rotarians.  Have you heard about the little varmint that is making big time news in the baseball world?  Well, listen up…
Stan Musial, Ozzie Smith, Bob Gibson, Lou Brock and Albert Pujols; all stars with the 10-time World Series champions St. Louis Cardinals; a franchise with an illustrious playoffs history, second only to the success of the New York Yankees.
And yet this season their most galvanizing figure is a little squirrel that scurried into the collective hearts of Cardinals Nation.  Known as the Rally Squirrel, this little varmint has taken an entire sport by storm. The Rally Squirrel made his Major League debut in early October, stopping play to scamper around Busch Stadium during St. Louis’ loss to the Philadelphia Phillies in Game 3 of the National League Division Series.

One night later, he came back, burrowing his way into baseball lore.

During the fifth inning of Game 4, the squirrel showed up again, this time crossing home plate distracting Phillies right-hander Roy Oswalt who was in the middle of a pitch.  Oswalt protested ‘squirrel interference,’ wanting a dead pitch, but the home plate ump said no.  The errant pitch counted. The Phillies ended the inning unscathed, but the rodent’s run became a death knell.

Although the little critter has not been seen lately, it’s likeness has become ever-present with the Cardinals’ push through the postseason.  “I think it’s good. The fans are having fun,” said Cardinals manager Tony La Russa. “There’s so much attention and pressure on the players that the squirrel provides a much needed distraction.”

In deciding to debut during baseball’s most high-profile month, the Rally Squirrel managed to maximize its media exposure and has left his paw print on a sport that embraces superstition.

Not all baseball-animal stories end happily, however. The best examples come from Cardinals rival, the Cubs, who have not won it all since 1908.  Chi town’s lovable losers have two of the sport’s most unfortunate animal anecdotes: the Curse of the Billy Goat in 1945 and the infamous black cat incident in September 1969.

Will the Rally Squirrel make an appearance in the World Series?  Fans sure hope so.  Only time will tell.  But what matters now is that a squirrel has become the symbolic face of St. Louis’ title push, a championship run that seemed impossible before the Atlanta historic September collapse.
In summary, it’s all been nuts!  And that is the bottom of our news on this Friday, October 21, 2011.
###
Posted by Unknown at 11:38 PM No comments:

Steve Jobs the Re-inventor
Good morning my fellow Rotarians.  Just last week America lost one of it the greatest entrepreneurs of the last century, Apple founder Steve Jobs.  Simply put Jobs took us into the digital age as he led change from vinyl, tapes, film, paper and other physical formats to digital ones.  And no better way to offer a tribute to this man than to share a few quotes…
I don't think I've ever worked so hard on something, but working on Macintosh was the neatest experience of my life. Almost everyone who worked on it will say that. None of us wanted to release it at the end. It was as though we knew that once it was out of our hands, it wouldn't be ours anymore.
For the past 33 years, I have looked in the mirror every morning and asked myself: 'If today were the last day of my life, would I want to do what I am about to do today?' And whenever the answer has been 'No' for too many days in a row, I know I need to change something.
I didn't see it then, but it turned out that getting fired from Apple was the best thing that could have ever happened to me. The heaviness of being successful was replaced by the lightness of being a beginner again, less sure about everything. It freed me to enter one of the most creative periods of my life.
If you haven't found it yet, keep looking. Don't settle. As with all matters of the heart, you'll know when you find it. And, like any great relationship, it just gets better and better as the years roll on.
My favorite things in life don't cost any money. It's really clear that the most precious resource we all have is time.
No one wants to die. Even people who want to go to heaven don't want to die to get there. And yet death is the destination we all share. No one has ever escaped it. And that is as it should be, because Death is very likely the single best invention of Life. It is Life's change agent. It clears out the old to make way for the new.
Steve Jobs was often compared to Thomas Edison, both being very rare people who only come along once a century.  Yet they were different.  Edison was the inventor who had a vision for things never seen before.  Jobs was the re-inventor who saw things as they were and had a vision to make them better.
Steve Jobs, dead at 56, a man who clearly made a very positive impact on our world.  And that is the bottom of our news on this Friday, October 14, 2011.
###
Posted by Unknown at 12:15 AM No comments: 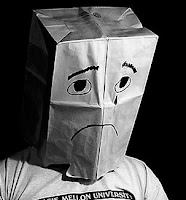 Incompetent People in America!
Good morning everyone and welcome to the bottom of the news.  This morning’s stories could be considered validation that there are incompetent people in our world.  The first example comes from Colorado…
COLORADO:  Colorado inmate Daniel Self filed a federal lawsuit in July against the Sterling Correctional Facility because prison personnel saved his life. They revived him after he had stopped breathing, from an attack of sleep apnea, but he contends he had previously demanded to officials that he never be resuscitated, preferring to die rather serve out his life sentence.
OREGON:  Terry Barth complained to hospital officials that he was "kidnaped" by paramedics and thus cannot be liable for the $40,000 he has been billed by Enloe Medical Center in Chico, Calif., where he was brought by ambulance following a motorcycle crash in August 2010. Barth said he had insisted at the scene that paramedics not take him to a hospital because he had no medical insurance. (Paramedics are legally required to take anyone with a serious head injury.)
MICHIGAN:  Police in Roseville, MI, arrested a 24-year-old roofer in August and charged him with reckless driving after he hit four cars.  He had noticed that his brakes had failed but inadvisedly tried to drive on, anyway, by extending his left leg out the driver's side door and braking "manually" (yes, as in "The Flintstones"). According to police, the man was completely sober.
CALIFORNIA:  The highest-paid state government employee in budget-strapped California was cited as one of the least productive workers in the system, according to a Los Angeles Times investigation. Jeffrey Rohlfing is on the payroll as a surgeon in the state prison system (base pay: $235,740), but he has been barred from treating inmates for the last six years because supervisors believe him to be incompetent. Last year, Dr. Rohlfing earned an additional $541,000 in back pay after he successfully appealed his firing to the state's apparently-easily-persuaded Personnel Board.  Currently, Dr. Rohlfing is assigned records-keeping duties.
Okay, so a few examples of incompetence in America as the bottom of the news for this Friday, October 7,  2011. Have a GREAT weekend!
###
Posted by Unknown at 5:10 PM No comments: