Good morning my fellow Daybreakers, what a beautiful day in the neighborhood.  Every so often check our news archives to see if there may be some stories from the past worth telling again.  And I came across one very special story that was too good to pass up.  Here is how it goes as reported by the Cedar Rapids Gazette.

So what do you do when your vehicle vanishes into thin air?

A Cedar Rapids man faced that question yesterday.  After getting out of his BMW in the pouring rain and running into his building to open his shop garage door, he noticed, as the door was opening, that his car was gone.

"I thought someone was messing with me, or perhaps an alien spaceship had taken my car," said this Hiawatha based business owner.  “I was only away from the car for 10 seconds, I can’t believe it!”

After initial confusion and shock he realized with the pouring rain, for quite some time, that his car might be in the worst place possible - a water retention basin behind his parking lot.

And yes, he was right.  As he bolted to the pond he realized that his laptop, digital camera, PDA and other items were also in the car, as he watched it fill up with water.

His confusion escalated…  “Do I take off my new pink shirt, or just dive in to save my stuff?”  Time was critical so he finally took the plunge.  He managed to salvage most of his items, except for the car as he helplessly watched his new BMW filled up with water.

One eye witness shared the reactions of employees as they came to work.  “We couldn’t believe it!  We know he is a dare devil when it comes to anything with wheels, but what was he thinking?”  This employee asked that his name be withheld.

Insurance authorities reported the BMW as totaled.  The only serious injuries were hurt feelings of the owner.

And finally, I quote Mr. BMW, Bart the Man Woods, as he reflected on his unfortunate event.  “Life is good, most everything was reclaimed (except for the car) and no one was hurt.  BUT, I’d still like a redo for about 15 seconds of that fateful Tuesday morning.” 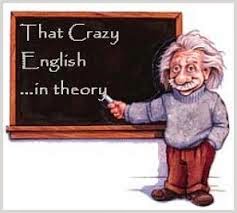 Good morning my fellow Daybreakers.  I thought I would share some interesting things about our English language.  Some would say that English is a crazy language.  Anyone who has learned another language would probably agree.  So, here are some examples…

There is no egg in eggplant, nor ham in hamburger; neither apple nor pine in pineapple. English muffins weren't invented in England or French fries in France.

We take English for granted. But if we explore its paradoxes, we find that quicksand works slowly, boxing rings are square and a guinea pig is neither from Guinea nor is it a pig.

So, if the plural of tooth is teeth, why isn't the plural of booth, beeth?  Doesn't it seem crazy that you can make amends but not one amend? If you have a bunch of odds and ends and get rid of all but one of them, what do you call it?

If a vegetarian eats vegetables, what does a humanitarian eat?   Who invented the English language, were they verbally insane?

In what language do people recite at a play and play at a recital?  Why do we ship by truck and send cargo by ship?

How can a slim chance and a fat chance be the same, while a wise man and a wise guy are opposites?  You have to marvel at a language in which an alarm goes off by going on. English was invented by people, not computers, and it reflects the creativity of the human race, which, of course, is not a race at all.