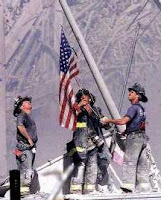 9-11 Remembered
Good morning my fellow Rotarians.  This Sunday, September 11th, will be the 10th anniversary of the most memorable tragedy of this generation in US history – the 9-11 terrorist attacks on our country.

Do you remember where you were at 8:45 am that Tuesday morning or what you were doing when you first heard the news?  Most people do.  For some it was like the first Challenger explosion or for a few of us, when JFK was shot.  For my Dad, it instantly brought back memories of Pearl Harbor when he was 8 years old.

At 8:45 a.m. an American Airlines 767 crashed into the north tower of the World Trade Center near the 80th floor instantly killing hundreds of people and trapping hundreds more in higher floors.  Initially most people thought it was a freak accident. Then, 18 minutes later a second 767 from United Airlines hit the south tower at the 60th floor. The massive explosion that followed caused many to realize that these were not freak accidents, but an attack on our country.

I was in Galena, IL ready to start a meeting with my Midwest regional team and my assistant called asking if I wanted to join her for breakfast to do a final agenda review.  She also commented that there was a story on TV about some ‘nut’ who apparently crashed a plane into the World Trade Center, but hey crazy stuff happens in that town, right?  Shortly thereafter I got a call asking if I had a cell number for one of our New York guys because his office number was out of service.  Hmmm, that seemed odd, but I gave her the number and went on to breakfast.

Walking through the lobby I didn’t give much notice to the small crowd around the TV and as breakfast went on people seemed more restless.  My admin called me again, this time kind of upset, asking me “Are you watching the news right now?  If not, find a TV, something is up in New York!”  The lobby was now so full I couldn’t get near the TV and my 9 am meeting was about to start late, so I bolted, thinking I will catch up with the news later.

My team of 35, all women, except for one guy, were quietly waiting.  I was the last one in and they all looked at me like I was a scary monster or something.  “Okay,” I said, “what’s up with you guys, did somebody die or something?”  Oops, not the right thing to say.  Nobody said a word.  Jill said she had been trying to reach her brother in NY who worked near the towers and cell service was out.  Finally, someone told me what was going on and I was shocked. Clearly, our training meeting was done before it started.  We found a TV, watched the next hour unfold as a group, prayed together and then we all went home.

By lunch time, I’m sitting at the Galena McDonald’s with my regional coordinator, both of us feeling numb to the morning’s events.  The reports continued to come out with the collapse of the towers, the crash at the Pentagon and a fourth plane crashing in a Pennsylvania field.  And later learning of the passengers on United Flight 93, led by Todd Beamer, whose final words came through an open line…  "Are you guys ready? Let's roll."  Amazing.
When I got home that afternoon I found Logan, my then 8-year old son, sitting on the floor glued to the TV.  Strange, that was how I found my Mom, glued to the TV and crying, when I walked in, home early from school on November 22nd, the day Pres. Kennedy was shot.
By 9:00 that night Pres Bush addressed our country, declaring "Terrorist attacks can shake the foundations of our biggest buildings, but they cannot touch the foundation of America. These acts shatter steel, but they cannot dent the steel of American resolve." I cannot begin to imagine what he and his people went through that day and beyond.
May we never forget 9-11.  You know, my Dad said the same about Pearl Harbor.  May we always remember the nearly 3,000 Americans who died, including those brave rescue workers.  And may we each have an 'attitude of gratitude' for those who continue to fight for our country, our people and our freedoms as a nation.  That day everyone grew closer to God.  May we always remember that HE is in control.  May we always remember.  And this is our news on this Friday, September 09, 2011.