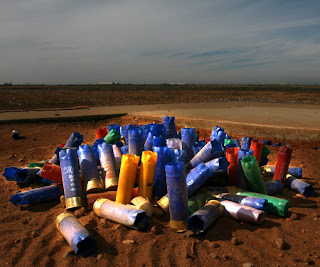 Going Out with a Bang!
Good morning my fellow Rotarians.  Here’s a story about “creative cremation” that would have made Charlton Heston proud.

You wouldn't need to pry the gun from his cold dead hand had he known that one day upon his death his ashes could be turned into ammunition. That's right, for $850 (plus shipping), Alabama's Holy Smoke will put your loved one's ashes into shotgun shells or pistol or rifle cartridges.

Founders Clem Parnell and Thad Holmes, state conservation officers, dreamt up the idea one night while on a stakeout to catch illegal hunters. Conversation shifted from the mundane to the existential, as it is bound to do on a late night stakeout. Parnell, had recently lost a family member and when discussing their feelings they found a mutual concern regarding traditional methods of disposing of loved ones' remains.

One can scatter ashes at sea, in pastures or from a mountain at dawn as a way of celebrating a family member's life.  Some people elect to be shot from a cannon or into space after passing. Why then, theorized Parnell and Holmes, couldn't someone with a passion for guns or hunting not be celebrated in a way that would be meaningful to them? With one pound of ashes filling as many as 250 shotgun shells, and the average body producing four to six pounds of ash after cremation, that is a lot of firepower to be remembered with.

Recently established after four years of planning, Holy Smoke has only had two clients for this unique service. But, now that the word is out Holy Smoke is now making pre-arrangements with interest from everyone from police officers, soldiers, hunters and even for beloved hunting dogs.

No guidelines have been provided on exactly how to use the ammunition once shipped, but surely respect for the dead is understood in this unique arrangement.

To learn more, check out their website at www.holysmoke.com.