Loss of a Comedic Genius 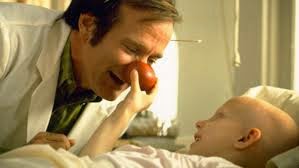 Good morning my fellow Rotarians.  This week the entertainment world lost a comedic genius.  Robin Williams did it all.  What he did most was make us laugh.
His physical comedy and funny voices launched his TV career in the 1970s as the oddball alien Mork and everyone's friend with his all-purpose greeting, "Nanu, nanu."

His death on Monday, from an apparent suicide, left a hole in the entertainment universe.

Williams’ guest appearance on Happy Days in the 1970’s gained him immediate fame that morphed into the long-running sitcom, "Mork & Mindy."  In the ‘80s he moved to the big screen, playing a rogue radio DJ in Good Morning Vietnam in 1987 and in 1989 he was an inspiring English teacher in Dead Poets Society.

He went on to play a grown-up Peter Pan, a divorced father who posed as a housekeeper, Mrs. Doubtfire, so he could spend time with his kids, and the voice of a freewheeling genie in Aladdin, where Williams showed incredible wit and his uncanny ability to ad lib.
Robin Williams won his only Oscar in 1998 for his role as a therapist counseling the math genius with a troubled childhood in Good Will Hunting.

For many years he worked with Billy Crystal and Whoopi Goldberg to aid the homeless with the annual Comic Relief shows and he did several USO tours overseas.  Williams was known for his avid support of the Red Cross, St Jude’s and many other organizations and families.

Born in Chicago in 1951, Williams was the youngest of three boys.  His mother was a model and his dad a senior executive at Ford Motor.  As a child Williams was shy, but always funny; typically accused of doing anything to get attention.  He attended HS in San Francisco and his senior class voted him both “Most Likely Not to Succeed” and the “Funniest.”  His college career landed him with a full scholarship to the Juilliard School in NY City, where we was classmate and friends with Christopher Reed and William Hurt.

Entertainment Weekly called Williams "the funniest man alive.”  Williams credited comedian Johnathon Winters for having the most influence on his comedic career. He was 63, still a sought-after star.

For me personally, I thought one of Williams best roles was as Patch Adams, a controversial  doctor, based on a true story, who used humor to help his patients.  He said, “You treat a disease, you win, you lose. You treat a person, I guarantee you, you’ll win, no matter what the outcome.  You always win.”